In 1950, there were 16,163 children enrolled in Fairfax County Public Schools (FCPS). By 1960 that number would climb to 59,870. The area surrounding of the City of Falls Church was a magnet for population growth in the 1950s, leading to overcrowding at the few schools in operation at that time. The overcrowding was exacerbated by the transfer of Fairfax County’s Oak Street Elementary School to the City of Falls Church. Oak Street was located within the boundaries of the newly formed city and pulled many children from Fairfax County, who could no longer attend the school. In anticipation of the transfer, FCPS officials began searching for new school sites north and west of Falls Church. In 1953, school officials located a site in the Kirby’s Corner area at the intersection of Westmoreland and Haycock roads. In September 1953, the architecture firm of Hayes, Seay, Mattern and Mattern was assigned to prepare plans for a nine-room school at the site. In May 1954, the plans were altered to expand the school to 16 classrooms. The contract for the construction of Haycock Elementary was awarded in July of that year to the Eugene Simpson & Brother Construction Company in the amount of $329,437.

Haycock Elementary School opened its doors to 606 students on September 6, 1955 under the leadership of Principal Elsie H. Snodgrass. The first years at Haycock were crowded because of the rapid growth of the surrounding community as new subdivisions were created and more families moved into the area. In September 1956, construction began on an addition of four classrooms and a student activity room at Haycock. In 1970-71 Haycock was further enlarged with the addition of more classrooms, a multipurpose area, gymnasium, music rooms, library, and cafeteria extension.

The 1970s were a decade of change at Haycock as our school was designated a center for students with learning disabilities (1971-72), a gifted and talented center (1976-77), and an English as a Second Language (ESL) center (1979-80). The first renovation of Haycock began on June 12, 1990. The renovation added more classrooms, a new heating and air conditioning system, carpeting, an enlarged library, a sprinkler system, and a new fire alarm system. The school office was also rearranged at this time to its present configuration. A second renovation was completed in time for our school’s 60th anniversary in 2016. In April of that year, a ribbon cutting ceremony was held to commemorate the opening of two building additions with 15 new classrooms, a new cafeteria, and a new playground. 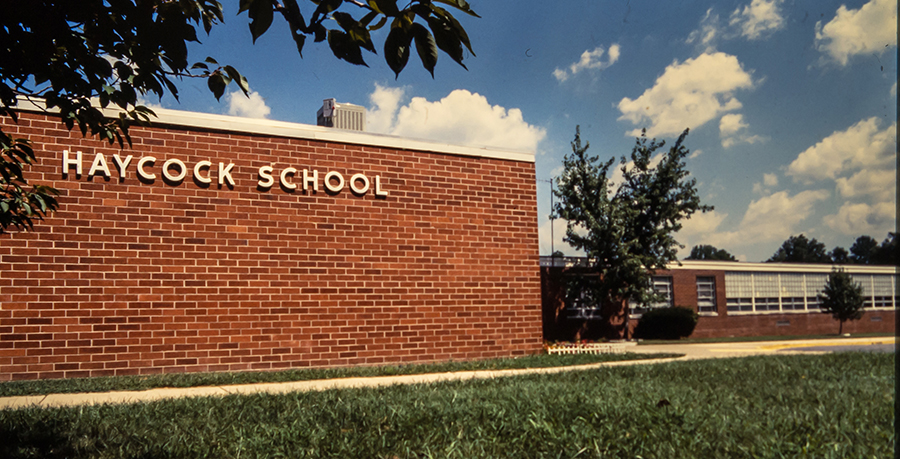 What’s in a Name?

Have you ever wondered how Haycock Elementary School got its name? It’s a story that begins in the 1800s when a man name John Haycock moved to Fairfax County and took up farming. Learn more in this video produced for the FCPS Red Apple 21 cable television channel.